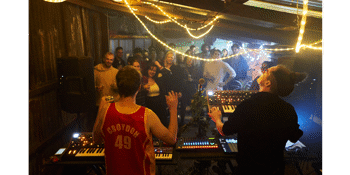 Where were you when they came for us?! Now, wouldn't you want the answer to that question to be something cool like "I was at Friend's Birthday's DOUBLE SINGLE LAUNCH at worker's club" instead of "I was at home trying to work out why the wifi's disconnected"? Let this indie-tronic duo's scintillating synths and cathartic kick drums kick some of the life back into life because life has really started to drop some of its energy lately imho. Supporting will be ZĀN and Alpha Loopy

Zan (they, them) is a singer, songwriter, and producer. Born in abbottabad, they were raised in boorloo (perth) and are currently based in naarm. Following their debut EP, Gulnaz (2018), Zan has spent the last few years writing music and performing along their travels; from the unceded lands of boorloo, to tongva land (los angeles), haripur, lahore, and naarm.

Real beats and tunes created live, in front of your eyes. With influences from Massive Attack, 60's lounge, and Romantic period orchestral music, Alpha Loopy is a punchy act embracing aural atmospherics and breakbeat rhythms to get you dancing.