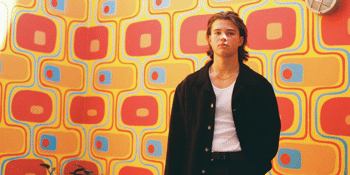 with Willlowbank Grove
The Workers Club (Fitzroy, VIC)
Thursday, 7 July 2022 8:30 PM
9 days away
18 Plus
Indie
Send this event to
Mitch Santiago is a self-taught multi-instrumentalist from Perth, Australia. Described by triple j as a "Perth prodigy making extremely good indie rock", Mitch Santiago celebrates the release of his latest single ‘Out For You’ with his first national headline tour in July.

‘Our For You’, is described by triple j as a "massive new track that sees Mitch Santiago sharpen his vast psych sound with a bitta indie rock flair. If you're into Spacey Jane, that's the vibe". It was added to full rotation and also saw Mitch Santiago recognised as an Unearthed Feature artist of the week. The song also had great support across all DSPs.

The release of ‘Out For You’ followed Mitch's first single, Falling, which has accumulated over 1.5 million global streams.

Mitch has busked and gigged through hundreds of performances to emerge as a seasoned live performer. This passion for live music has enabled him to shape his massive one-person live show and signature sound and also plays a crucial role in refining his original music "to a place where I am super happy with it".

Attendees of one of Mitch's shows can expect to be blown away by the high-energy union of catchy song-writing, powerful vocals and a soaring soundscape of multiple live-looped instrumental and drum tracks and effects fusing into a sonic wall that will leave them breathless