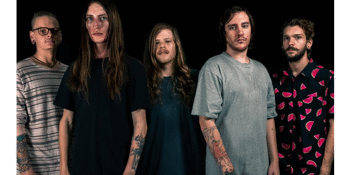 with The Wandering, Inhibitor, Cerement
The Workers Club (Fitzroy, VIC)
Saturday, 1 May 2021 8:00 pm
12 days away
18 Plus
Heavy Metal
Send this event to
FACEBOOK EVENT

After releasing their debut full-length album 'Humanoid' at the end of 2020, Brisbane’s dual-vocal deathcore outfit Babirusa have announced the ‘Humanoid’ Australian Tour in its mechanistic wake.

Brandishing an unrelenting style of speed and crushing heaviness, Babirusa confront the existential crisis of sentient artificial intelligence in sonic form. Garnering listeners both nationally and internationally, as well as the attention of Triple J, Babirusa are set to make an impressive debut off the back of this record.

Joining them is Newcastle heavy-hitters, The Wandering, and Melbourne newcomers Inhibitor.