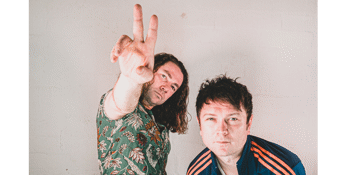 Sibling duo Square Dance Caller entered the music scene earlier 2021 with their debut single “Swimming Pool”, a packed show at The Workers Club in Melbourne, huge success at College Radio in the US and the blogging and playlisting world in Europe. The brother’s released their second single ‘Electric Sleep’ with a video that was a nod to their Grandfather, featuring footage of him in his prime as an actual square dance caller.

Finding ways to stay creative during the endless Melbourne lockdowns, the brothers returned with their eagerly awaited third single ‘Want You So Bad’, a song that has also gained traction in the US college market.

Square Dance Caller are now excited to finally be launching their debut album - Celebrity - with a show at The Worker Club in Fitzroy on Thursday November 18th. Supporting them on the night is the very talented Molly Mckew and the rocking Sienna Wild.

The night promises to be extra special as Melbourne emerges from lockdown and live music makes a triumphant return once more.