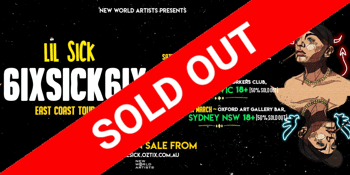 He burst onto the scene in August 2019 with his debut EP YSOSICK which landed a No.2 spot on the Australian Hip Hop iTunes chart.

His unique, flamboyant personality is exciting & attention grabbing, and has built him a cult following over the past 6 months. He has already performed alongside huge Australian hip hop acts such as Wombat & the legendary Drapht. His entertaining Music Videos have all exceeded 100K+ views with every release thus far.

Lil Sick, known as the fastest growing hip hop act of 2020, will be on an East Coast Tour of Australia promoting his brand new project 6IXSIXK6IX set to release March 16th. He will be performing in Brisbane, Melbourne & Sydney this April/May.