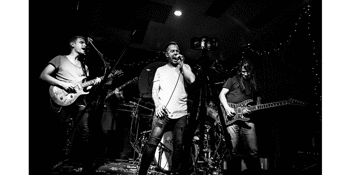 Fresh out of the recording studio, these sonic alchemists are ready to drop their first single in anticipation of their debut album. A textural blend of dreamy guitars, hypnotic rhythms, and crushing riffs, Seas Of Titan is an auditory phenomenon not to be missed. With new, never performed songs in the works, come bang ya head and welcome the Titans to The Worker's Club stage for the first time!

In support:
A concoction of diverse influences has allowed The Nuremberg Code to develop a unique style that still is able to capture part of that tough Aussie metal sound that is now internationally recognised. The Nuremberg Code: a code of Ethics to be adhered to when conducting human experimentation.

Spacegoat are an alternative metal band hailing from Bendigo, Australia.
Musically they infuse several metal sub-genres and have been likened to Flyleaf, Tool, Faith No More, Deftones, The Butterfly Effect and Halestorm, however Spacegoat really do manage to create a sound that is uniquely theirs. The five members have a synergy that shines through the songs and is particularly evident when they take to the stage, with the band’s performances having been described as “energetic and infectious.”

Counting Silence is a progressive alternative rock band from Melbourne, which brings together four life-long musicians who want to engage and surprise fans of heavy, melodic music.