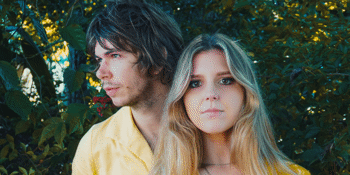 with special guests MAJAK DOOR
The Workers Club (Fitzroy, VIC)
Friday, 30 October 2020 8:00 pm
107 days away
18 Plus
Indie
Send this event to
With the dawn of a new decade comes the birth of powerhouse group, SUNFLOWER. Hailing from Brisbane, SUNFLOWER are the perfect storm of soul, pop and rock in a stifling musical climate.

The five-piece are the love child of leading frontwoman Kahlia Ferguson and frontman Lawson Doyle - of The Fergies and Port Royal notoriety respectively. The dynamic pair were fatefully drawn together at Bluesfest 2019, struck by one another's raw talent. They quickly discovered a unique musical connection through months of song writing and performing together.

Fortuitously, both lead singers found themselves standing in the ruins of their respective bands within a week of each other. Instead of retreating to lick their wounds, the concept of a brand-new project featuring their paradoxical musicality and seductive mystique quickly came to life.

Like a phoenix rising from the ashes,  comes an epic collaboration of musical forces - SUNFLOWER.  Immediate main stage festival performances and sold-out headliners, combined with the success of their debut single, ‘Better Days’ have cemented the band’s position as a leading force in Australian music today.
Continuing to spread their message of empowerment and hope during this significant global hardship, comes their follow-up hard-hitting soul/rock anthem, ‘Get Yourself Together’.

The dynamic pair were fatefully drawn together at Bluesfest 2019, as showcasing artists on the Delta Stage. Struck by each other's raw talent, the two quickly discovered a unique musical connection through months of songwriting and performing together behind the scenes.

Fortuitously, both lead singers found themselves standing in the ruins of their respective bands within a week of each other. Instead of retreating to lick their wounds, the concept of a brand new act featuring their paradoxical musicality, positive mantra and seductive mystique quickly came to life.

SUNFLOWER carries heavy influence from the prowess, expressionism and freedom of legendary rock outfits Oasis, The Killers,  Fleetwood Mac, Coldplay, The Rolling Stones, Joni Mitchell and The Doors. Their music is a well-crafted fusion of the eclectic tones and grooves of the '60s & '70s, enveloped by their modern energy and timeless lyricism.
It is a part of the human condition to experience times where faith is lost and life’s purpose is hard to define. 'Get Yourself Together’ is a song that holds a mirror up to those who have lost sight of who they are and aims to be a voice of reason in the darkness.

“We’ve all had times in our lives when push has come to shove and we know it’s time to get our sh*t together. This song was written as an anthem for the typical 20-something-year-old struggling to get their life back on track. I think everyone of us can relate to that universal feeling of that push to stop messing around. That push can come in the form of an event or a relationship or an opportunity. The world is moving so fast and we’re all just trying to find our feet in it.” - Kahlia Ferguson

“‘Get Yourself Together’ was a no-brainer when it came to selecting the next single. I felt this song had so much depth and relatability. At our early shows, we  saw it resonate strongly with our audience. I know people are going to feel the love and honesty behind this song.” - Lawson Doyle

SUNFLOWER is set to shine bright with their highly-anticipated follow-up single,
‘Get Yourself Together' - Available Aug 7th.