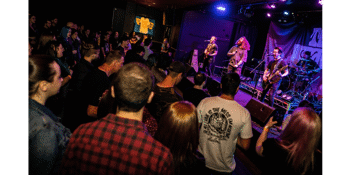 The Motion Below 'Breakthrough' EP Launch

with Special Guests
The Workers Club (Fitzroy, VIC)
Thursday, 4 August 2022 7:00 pm
37 days away
18 Plus
Rock
Send this event to
Following up from their sold out headliner earlier this year, Melbourne post-hardcore/metalcore band The Motion Below will return to the stage this August to celebrate the release of their latest EP, “Breakthrough” (out July 8th), the band’s third major release featuring hit singles “It’s All The Same” and “Who I Am”.

Having overcome a series of challenges that were only exacerbated by the worldwide pandemic, The Motion Below have no intention of slowing down now. Since their inception in 2017, the band have evolved their sound to soaring new heights, blending their metalcore roots into a captivating cocktail of post-hardcore, pop-punk and alternative rock, delivered through a refined stage performance that is equal parts emotional and visceral. Experience the band as they have never been seen before as they interweave their new stories, exploring themes of personal growth and change, with a select few older classics.

Featuring some of Melbourne’s best up-and-coming talent, yet to be announced, The Motion Below aim to blow the roof straight off of the Worker’s Club in Fitzroy. You won't want to sleep on this event as tickets are sure to sell quickly.