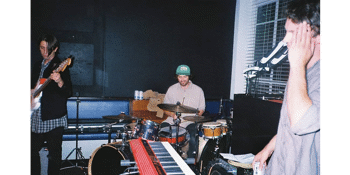 with Ozergun, The Burley Griffin
The Workers Club (Fitzroy, VIC)
Sunday, 10 July 2022 1:00 pm
12 days away
18 Plus
Indie
Send this event to
FACEBOOK EVENT

Fresh from the release of their latest single ‘Into the New World’, Canberra’s HYG are playing at the Worker’s Club for their first Melbourne show since the pandemic.

HYG have been filling out living rooms and band nights across Canberra with their hard hitting, constantly evolving and highly energetic performances. Drawing on krautrock, electronic and jazz-fusion influences, HYG combine structured improvisation with playful rhythmic and textural elements to create their own distinct sound across genres.

Following on from 2020’s ‘Be Here’, which gained airplay on national community radio stations such as PBS, RRR and 2SER, as well as a ‘Wild One’ feature on Rage, 2022 sees HYG release their latest single ‘Into the New World’, an instrumental groove-heavy odyssey.

Having been booked with the likes of Party Dozen, Liars, the Lazy Eyes and the Laurels, HYG are heading back down to unleash their frenetic live show in Melbourne, bringing with them the first taste of their upcoming EP to be released later in the year.