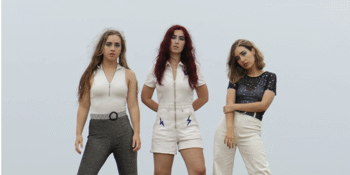 Little Quirks 'Someone To Hold' Tour

Central Coast trio Little Quirks are hitting the road through March and April to celebrate the release of their latest single ‘Someone To Hold’. And also to celebrate the release of themselves from the no-gig shackles of 2020. The band of two sisters and a cousin are growing a reputation as one of Australia’s most exciting new bands with their raise-the-hair-on-the-back-of-the-neck three-part harmonies over exuberant folk/pop songs. Despite drummer Mia being still only 17, the band is already captivating audiences around the world and clocking millions of streams. ‘Someone To Hold’ has been described as “world-class indie folk beauty” by Double J’s Dan and is a stunning addition to their remarkable catalogue of ear-worms.