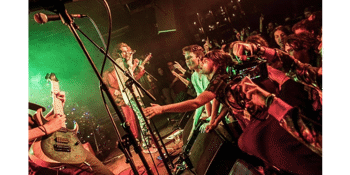 A night of Funk, Rock and Punk with The Tax Evaders and Alpha Goose - come dance the year away at The Workers Club! The former are locals of Melbourne’s South East, known for their energetic blend of covers and dubious monetary practices, all with a funky rhythm behind it and a hotline to the Cayman islands. They draw influences from INXS, Bruno Mars, and many others in their music. Alpha Goose on the other hand are funky mother lovers hailing from Sydney’s underground scene. They mix influences from P-Funk, the Red Hot Chili Peppers, and James Brown, as well as many others to create some of the grooviest in-your-face music on the East Coast, with ambitions of proving themselves the best bird-based boy band in the country. The two are supported by locals Raging Moby, and the Francis Glass band, who draw influence from Australian Crawl and Babe Rainbow respectively to create their own unique sonic experiences.