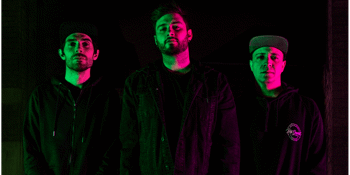 Coming to a venue near you is a rollercoaster of a lineup featuring Clay J Gladstone (Syd), Drastic Park (Mel) and Wolf & Chian (Ade) join forces to showcase their angsty, bratty and high energy sounds across Australian cities this March and April.

Hot off the success of their most recent single 'SORRY' which premiered on Triple J's Short.Fast.Loud and added to Unearthed rotation, Clay J Gladstone are building some serious hype around the Australian Emo Punk scene. Triple J (SFL), Heavy Mag, The Faction and Idobe Radio (LA) are all calling Clay J Gladstone 2021 hot property - further backed up by a string of sold out Sydney shows (Crowbar/Frankies)!

While 2020 was write-off for most bands, it didn’t stop Melbourne Pop Punk trio Drastic Park from keeping busy. After supporting punk veterans Antiskeptic, Seraphs Coal and For Amusement Only at the renowned Corner Hotel In Melbourne, they recorded and released a second EP during lockdown, receiving widespread critical acclaim from Blunt Mag, Hysteria Mag and Wall of Sound - with each of their four singles being premiered on Triple J’s Short.Fast.Loud. Now with three sold out shows under their belt, Drastic park is definitely a band to watch in 2021!

Last but definitely not least, Wolf & Chain is a punk/emo band hailing from Adelaide, South Australia. With a shared love for the theatrical flare, the band seeks to highlight the emotional charge of the emo and punk scene that has felt forgotten, whilst incorporating modern and unique elements to their creative vision. Every live show from the band is full of energy and raw emotion which was highlighted at the bands recent sold out headline show at Lion Arts Factory celebrating the release of their stellar debut music video for single ‘An Honest Mistake’ leaving fans in awe of what is to come from this young band.

The Wolfstone Park Tour will be traveling through Sydney, Melbourne and Adelaide in March and April. Due to the nature of Covid-19 we will advise any changes to the tour if anything occurs beforehand or during the tour.