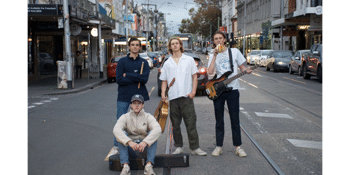 Formed in the summer of 2019/20, The Groundswell has been brewing ever since. The lockdowns of 2020 meant the band remained underground for a while, jamming and writing, the summer of 2020/21 was spent enjoying, travelling, recording and producing the upcoming tracks. Inspired by the melodic raw sound of bands such as The Strokes, RHCP and the Arctic Monkeys, as well as the impassioned, ardent song writing of bands such as Gang of Youths, The Groundswell present a unique and refreshing sound, encapsulating the ups and downs, but more importantly the innate enjoyment of adolescent life.

The Worker’s Club’s storied band room is the ultimate venue to watch the first official gig The Groundswell will be headlining. Opening up first, we are then going to be joined by Surfer Rosa, a young up and coming group transporting us back to the glorious alt-rock of the late 80s to early 90s. Finally, Stanley Hotel will be performing their maiden gig to get everyone up and about. This is a night you just can’t miss and will be topped off with The Groundswell’s set to cap off the night.